The mission of Dometic’s Corporate Social Responsibility efforts is to contribute to a healthy planet that allows families to safely explore the outdoors for many generations.

Dometic has chosen Care Camps as the signature charity to accomplish this mission. After partnering in July of 2018, Dometic and Care Camps have been able to effectively implement the Dometic Capital Fund and most recently, the Heroes of Hope Campaign.

Care Camps is a non-profit that sends children affected by cancer to medically supervised camps where they can have fun with other kids who understand that they are going through, receive their normal treatments, and make lasting, joyful memories.

The Heroes of Hope Campaign is designed to highlight the true heroes of Care Camps—the ones who change the lives of these children. The volunteers and medical staff who are on-site at the Care Camps are what make the camp an enjoyable experience for the kids.

While each Care Camp is ran for about two weeks during the summer, Dometic will be involved at various Care Camps during the summer months. Dometic has locations and employees all over the United States and Canada who are eager to get involved and volunteer at the camps and see the efforts of the Dometic Capital Fund put into motion.

Dometic also promoted Care Camps through our booth at RVX in Salt Lake City in March 2019. With 1,000 small teddy bears and a few larger bears, show attendees were drawn to the Dometic booth to learn more about Care Camps and how they can get involved in helping the children at the camps. The Dometic Capital fund was well supported and a huge success.

If you would like to help support Care Camps through the Dometic Capital Fund, text CAMP to 20222 to donate $25 and help change the life of a child who is going through cancer treatments, recovering, or has a sibling with cancer. 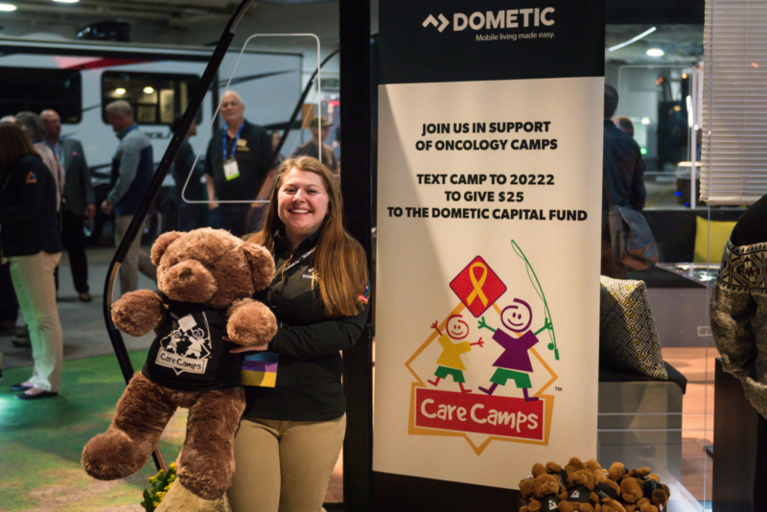